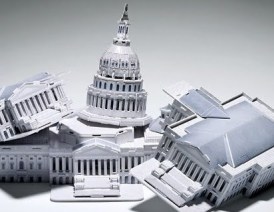 Yesterday, as we faced our ONLY chance until 2015 to fix the filibuster, Senate Majority Leader Harry Reid did NOT act boldly. Instead, he consigned the Senate, and the American people as a whole, to two more years of continued crippling gridlock.

Rather than pushing for real reform, Sen. Reid agreed to a compromised “bait-and-switch” deal that he and Senate Minority Leader Mitch McConnell may call "filibuster reform," but which we all know will do next to nothing to actually fix misuse of the filibuster.  S.Res.16, the standing rules for the 113th session of the Senate, not only didn’t fix the filibuster problem (i.e., 60 votes will still be required to pass even the most routine bill), but Sen. Reid gave away the shop by agreeing to give the GOP opportunities to add TWO “poison pill” amendments to each of those bills managing to make it to the floor for debate and vote.  How is that progress?  It’s like taking one step forward to make it slightly easier to get judicial and cabinet appointments processed in a more timely fashion, only to take 10 steps backward on dealing with routine and necessary business.

As Senator Reid is fond of saying himself, “let’s be crystal clear” about this issue.  Senator Reid could have secured the votes to pass a stronger measure had he chosen to lead the way.  We all clearly heard him boast on the media that he actually had the 51 votes he needed.  Senators Merkley and Udall showed tremendous leadership in educating their fellow senators and the public about the need to fix the Senate, and they offered concrete proposals to do so.  But, Sen. Reid struck yet another “hand shake” deal with Sen. McConnell who’s probably still laughing to this moment at Senator Reid’s naivety.  One needs to ask: “why did he throw those votes under the bus?”

What’s that old phrase?  “Fool me once, shame on you — Fool me twice —shame on me?”  When is Senator Reid going to realize that Senator McConnell has a hidden agenda and that his “word” cannot be trusted?  This is now the second session in a row Sen. Reid has sold out his fellow Democrats by striking a bad deal with Sen. McConnell.  We desperately needed him to deliver strong filibuster reform, and again, he didn’t.  Sen. Reid is treading on thin ice as he has now “fooled us twice.” We’ll be taking a serious look at how the 113th Congress unfolds and whether his “compromise” will make matters better, or worse, for the American people as a whole.