Instead of attacking struggling seniors, veterans, children and the working poor by slowing the inflation growth rate of an average $1,200/month Social Security check, shifting more healthcare costs to 65 and 66-year-olds and their employers, or slashing food stamps and Medicaid that are lifelines for working poor families, how about we try these 10 budget fixes first? By contrast, these policies primarily or exclusively affect the wealthy, while achieving lots more revenue/savings.

As President Obama has previously criticized the mean, brutish Republican cuts: “There’s nothing serious about a plan that claims to reduce the deficit by spending a trillion dollars on tax cuts for millionaires and billionaires. There’s nothing courageous about asking for sacrifice from those who can least afford it and don’t have any clout on Capitol Hill.”

Or to borrow from Bill Maher, the GOP budget plan goes after children, the poor, the jobless, the old and the sick. This is picking on the weakest kid on the playground and getting called courageous. Courage would have been going after the rich and the defense department.

The Republican fixation with cutting Social Security benefits or raising the eligibility age for Medicare fail to achieve much savings and have absolutely nothing to do with the “fiscal cliff.” (Social Security doesn’t even have anything to do with the deficit/debt generally). They are, as Nancy Pelosi described them, simply “trophies” that the GOP want to claim in their ceaseless war on FDR’s New Deal and President Johnson’s Great Society. 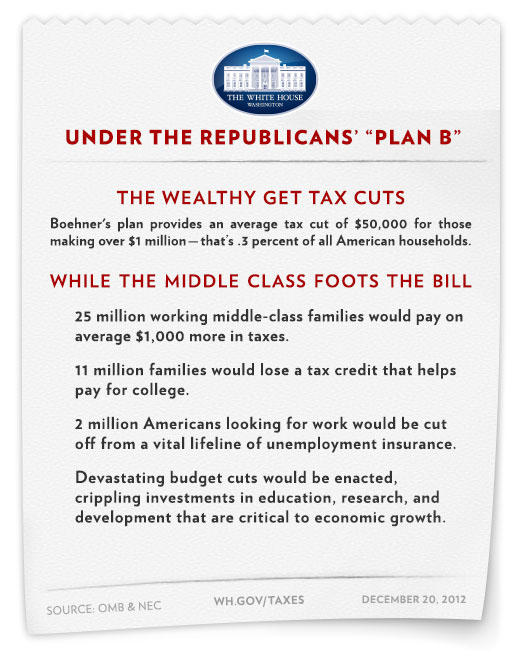 House Republicans today, in addition to voting on Speaker John Boehner’s (R-OH) so-called “Plan B” — which extends the Bush tax cuts on income up to $1 million — will also vote on a bill to replace the spending cuts scheduled for the end of the year.

As The Hill reported, the bill closely mirrors a measure passed by House Republicans in May known as the “The Sequester Replacement Reconciliation Act of 2012.” (Here is the underlying legislation, which will include these minor tweaks.) That bill voids both the military spending cuts and domestic spending cuts set to take place in 2013 and replaces them with a host of cuts to domestic spending, including:

– Cuts to food stamps that could knock millions of low-income Americans out of the program;

– Cuts to Meals on Wheels, a program that delivers meals to seniors or other individuals who are unable to prepare their own food;

– Cuts funding to health exchanges that will be created under Obamacare and funding for Medicaid included in the same law;

– Cuts to the Dodd-Frank financial reform law that will yield no cost savings, but will make bailouts of big banks more likely;

– Denying the Child Tax Credit to the parents of American children, if the parents are undocumented immigrants.

The White House threatened to veto this set of spending cuts back in May, calling them “a particular burden on the middle-class and the most vulnerable among us.”

The inclusion of these cuts is ostensibly to placate House Republicans upset at Boehner for advancing “Plan B,” which does nothing on the spending side of the federal government’s ledger. Plan B already includes provisions that will cut taxes for some of the wealthiest Americans while raising them for low- and middle-income families.

Speaker of the House John Boehner (R-OH) is forging ahead with his plan to vote on his so-called “Plan B,” a bill that would extend the Bush tax cuts on income up to $1 million. Boehner is calling the bill a “net tax cut,” but as ThinkProgress noted yesterday, it will raise taxes on millions of middle-class families by letting several key tax credits lapse.

According to an analysis by the Tax Policy Center, nearly fifty percent of Americans in the richest 1 percent would see a tax cut under Boehner’s bill, while almost one-quarter of Americans in the lowest income quintile will see their taxes go up by an average of $934, compared to current policy, as this table shows: