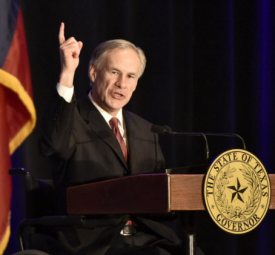 — Anna, Victoria, Bobby, Manny, and the rest of the team

Officials from Republican Texas Governor Greg Abbott’s administration have raided Planned Parenthood health centers across the state, demanding the confidential records of women who visited the health centers, including ultrasound records.  The news is especially alarming for a state with an extensive history of criminalizing abortion.

And the raids came just three days after Gov. Abbott announced that the state will end the one remaining source of government funding for Planned Parenthood—funding to provide health care for families earning less than 19 percent of the federal poverty level, or $3,760 for a family of three.

In total, seven states have eliminated funding for Planned Parenthood since the summer despite having done nothing wrong. And the U.S. House of Representatives recently passed a special budget bill to defund Planned Parenthood that cannot be blocked in the Senate using the filibuster, which is how other bills have been stopped from attacking the organization.

MoveOn.org has put together a plan to fight back:

We simply cannot allow anti-abortion extremists to destroy an organization that helps so many people—or to roll back women’s rights and access to health care.

Click here to chip in and stand with Planned Parenthood.

Now, we need to show that attacking Planned Parenthood is a political loser and will cause vulnerable Republicans running for re-election next year to lose support among women. We know this strategy can work because Planned Parenthood is enormously popular. And we’ve used this strategy before and won: The Republican War on Women is a big reason why Todd Akin and Mitt Romney lost their elections in 2012.