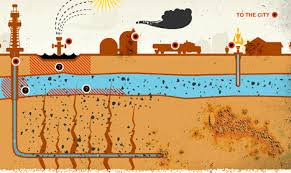 Just as a fracking operation is starting up in Elko County, and … just as President Obama is getting ready to nominate a new Secretary of Energy to run the Department of Energy, a post on Truth-Out reminds us ‘why’ this appointment is so important.  The rumored name for the appointment just happens to be a proponent of fracking … so … if he were to be appointed, how likely do you believe it would be that regulatory action would be taken against Energy Corporations doing verifiable damage to our environment?  Here’s an excerpt, but please take a moment to click the link below and read the full article.

“Hydraulic fracturing, or fracking, is a controversial drilling technique that is facilitating an oil and gas boom in Ohio and nearby states. Fracking produces large quantities of chemical-laced waste fluids and mud.

On the night of January 31, state investigators acted on an anonymous tip and caught Lupo’s employees dumping oil and gas drilling waste – fluid, mud and oil – into a storm sewer that empties into a tributary of the Mahoning River, according to the Justice Department …”