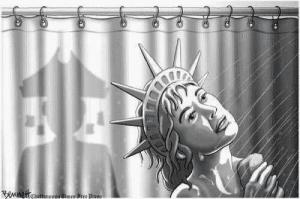 Our three Teapublican congressmen from Nevada, Mark Amodei, Joe Heck and Cresant Hardy locked arms in antipathy and voted to deny Syrian refugees entrance to American shores (Roll Call Vote 643: HR 4038) just as their ancestors denied access to German Jewish refugees during WWII, half of whom died during the Holocaust.  Surprisingly, they didn’t amend the bill so they could dismantle Lady Liberty as well.

Lady Liberty was officially presented to America in 1886 as a gift of the French to the American people.  Her French sculptor Frederic Auguste Bartholdi had originally drawn up plans to create a monumental statue in the form of an Egyptian fellah, or a peasant women, which means she would have been a “Muslim” woman. He wanted to place her at the Suez Canal’s Port, but couldn’t find the financing.  Instead, he reworked everything and she was presented to us instead.  I’m sure if the cowardly Republimen realized this, they’d be more than happy to completely dismantle her and send her packing as it’s clear that they no longer believe in the motto inbscribed at her base:

“Give me your tired, your poor,
Your huddled masses yearning to breathe free,
The wretched refuse of your teeming shore.
Send these, the homeless, tempest-tossed to me,
I lift my lamp beside the golden door!”

It was an egregious American President and his Administration that created this mess, by lying us into starting a pre-emptive war in Iraq, that destabilized the entirety of the middle east, spawning ISIS and the carnage they’ve created.  Still, the Republimen in Congress feel absolutely NO ownership of their savage carnage nor for the resultant refugees fleeing for native country for their lives.  And now, Republican despots are touting how terrified they are of widows and 3-5 year old orphaned Syrian Refugees.

Personally, I’m ashamed of the action our representatives in the Congress took today.  It’s their jobs to lead this nation and to make things work.  Instead, all they can do is cast doubt on anything and everything, vote to do nothing, and then crawl back under their favorite rock in fear.