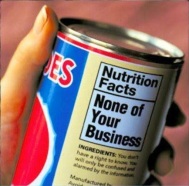 Today, 275 members of the U.S. House of Representatives voted in favor of H.R. 1599, the DARK (Deny Americans the Right to Know) Act. By voting for the DARK Act, these politicians (including  all of Nevada’s GOP Representatives—Amodei, Hardy and Heck) voted AGAINST truth and transparency, AGAINST science, AGAINST your right to know, and AGAINST the more than century-old right of states to legislate on matters relating to food safety and labeling. If this bill passes the Senate and is signed into law, it will nullify laws in states like Maine, Connecticut and Vermont where currently, GMO products are required to be labeled as such.

Whatever your views on GMOs, there is no Constitutional justification for the federal government to preempt state laws in this area. There certainly is no justification for Congress to preempt private sector efforts to meet consumer demands for non-GMO foods, while allowing those who support the use of GMOs to do so.

H.R. 1599 was sold to Congress via multi-million dollar public relations and lobbying campaigns built on lies and deception. Rumored to have been written by Monsanto themselves, the bill’s sole purpose is to support one industry—Monsanto’s poison-peddling industry—that was founded on lies and deception from the get-go. Monsanto—that same corporation who sold Agent Orange to our government as “safe” to use on our nation’s soldiers.

According to the bill’s sponsor, Rep. Mike Pompeo, the DARK Act gives consumers what they want: the means to know whether or not their food contains GMOs: “Consumers can choose to presume that all foods have GMO contents unless they are labeled or otherwise presented as non-GMO.  Meaning that it is knowable and it is known by the public which products have GMO and which don’t.”

Government regulation should NOT be an iffy, maybe they will, maybe the won’t kind of thing.  But, the DARK Act turns regulation upside down.  It would create a VOLUNTARY, government-run non-GMO certification program. Unless every producer of non-GMO products pays to have those products certified as non-GMO, consumers will still have no way of knowing which products contain GMOs, and which don’t. And why should the burden of labeling fall on the producers of non-GMO foods, when the risk factor is associated with those foods that do contain GMOs?

Did our Congress members vote against us because they were fooled by Monsanto’s slick, deceitful packaging of this so-called “Safe and Accurate Food Labeling Act”? Or did they simply vote with their wallets, stuffed full of biotech and junk food industry cash?

We don’t know. Given the Citizens United ruling, we’ll probably never know.  But we better know this: We can’t let this bill get through the U.S. Senate. We need to target Senator Heller and let him know this bill is unacceptable.

The 2015 fiscal year ends on September 30, 2015 and we do not yet have a 2016 budget, a transportation bill, nor a resolution to Veterans Administration shortfalls which may shutter a number of VA hospitals.  And if that isn’t enough on their plates to handle when they only plan to actually work 16 days between now and then, they also need to resolve their issues with the Iran Nuclear Deal.  AND … there are no plans to cancel their August recess.

Last week, the United States along with France, Germany, the United Kingdom, Russia, and China signed a deal with Iran to substantially limit Iran’s nuclear program in exchange for the removal of international sanctions.

Under the new nuclear deal, “Iran has committed to extraordinary and robust monitoring, verification, and inspection,” according to the White House. “International inspectors from the International Atomic Energy Agency (IAEA) will not only be continuously monitoring every element of Iran’s declared nuclear program, but they will also be verifying that no fissile material is covertly carted off to a secret location to build a bomb. And if IAEA inspectors become aware of a suspicious location, Iran has agreed to implement the Additional Protocol to their IAEA Safeguards Agreement, which will allow inspectors to access and inspect any site they deem suspicious. Such suspicions can be triggered by holes in the ground that could be uranium mines, intelligence reports, unexplained purchases, or isotope alarms.” (Please take the time to read more here.)

Congress must now review the deal—and decide whether to pass a resolution to disapprove the agreement. The entire process could take up to 82 days, and during that time, the President cannot lift sanctions on Iran until the review and voting period is over. The law also requires the Administration to provide detailed reports to Congress every 90 days to ensure that Iran is complying with the nuclear agreement.

Here’s how that review process should work, according to legislation passed by Congress and signed by the President in May: The White House delivered the agreement to Congress on Monday—five days after the signing of the Iran deal. Now, Congress has 60 days to review it, or until mid-September. (Keep in mind that Congress will be in recess from August 10 – Sept. 7.)  Congress then has 12 days (by the end of September) to vote on a joint resolution approving or disapproving the deal. Or Congress could opt to do nothing.

If Congress passes a resolution disapproving the deal, the President will most likely veto their disapproval. Congress would then have 10 days to override the veto, which would require a two-thirds majority in both the Senate and House. (If Congress were to override a veto, the President would lose his ability to waive sanctions on Iran, which would cause the current agreement to fall through and destroy our nation’s credibility with our negotiating partners.)

Congressman Peter Roskam (R-IL), Chair of the House Republican Israel Caucus introduced legislation expressing the sense of the House of Representatives in disapproval of the agreement between the P5+1 and Iran. The resolution is “intended to build support for an expected vote on a formal joint resolution of disapproval in September.”

Worth Noting:  Two Representatives from Nevada Mark Amodei and Joe Heck have signed on a co-sponsors of this resolution of disapproval.

The House has been working on appropriations bills for FY 2016. Thus far, they’ve passed Commerce, Justice and Science (HR 2578); Defense (HR 2685); Energy and Water (HR 2028); Legislative (HR 2250); Military and Veterans (HR 2029); and Transportation and HUD (HR 2577) appropriations bills.  But when they got to the Interior and Environment Appropriations Bill (HR 2822) last week, they had to pull it from the floor after a series of amendments were introduced regarding whether the Confederate battle flag should be displayed on public lands. Three amendments, introduced by Democrats, had been passed on July 7th that would block the National Park Service from allowing private groups to decorate graves with Confederate flags specifically in cemeteries in Georgia and Mississippi and would bar the Park Service doing business with gift shops that sell Confederate flag merchandise. Unhappy with those passed amendments, a Republican sponsored amendment was introduced essentially nullifying the passed amendments. To keep from seeing everything degenerate into a total brouhaha over the Confederate Flag, Speaker Boehner pulled the bill from the floor.

Senate Democrats have blocked consideration of appropriations bills until a new budget agreement is negotiated that will mitigate the sequestration budget cuts since 2013. Congress aims to complete the appropriations process by the end of the fiscal year, September 30. If they don’t, then they’ll need to pass a short-term Continuing Resolution to prevent yet another government shutdown.

Meanwhile, the Veterans Administration has put Congress on notice that they have a $2.5B shortfall that if not resolved will force them to start closing some VA hospitals beginning in as early as August.

Both the Highway Account and the Mass Transit Account of the Highway Trust Fund are nearing insolvency, according to the Department of Transportation. 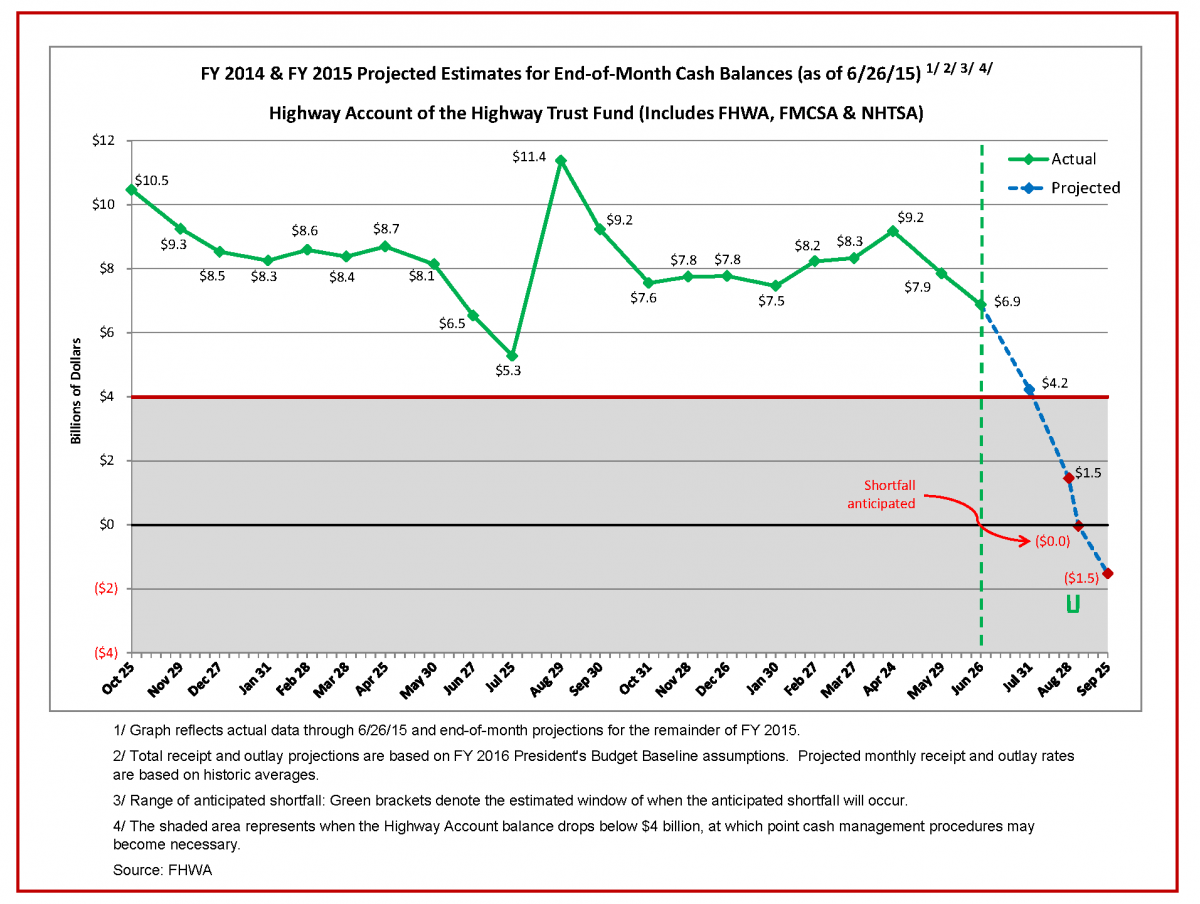 “The state of our nation’s infrastructure is not a partisan talking point; it is a problem facing all Americans. So I am encouraged that Members of Congress are asking the tough questions about how we will find solutions together. As I have said many times, we cannot build tomorrow’s transportation system with yesterday’s policy and yesterday’s funding; I look forward to working with both parties to pass a long-term bill that aggressively boosts investment and changes outdated policies so we can build for the future.”

With a shortfall in the Highway Trust Fund approaching, cash management steps are not far away.  Because the HTF supports critical roadwork by State DOTs, these cash management procedures will slow improvements and basic repairs on roads across the U.S.   With the Highway Trust Fund authorization set to expire on July 31, the House did pass an extension through December 18. You’re going to love this.  The claim is that the extension would provide $8 billion in new money – $5 billion from tax compliance measures, and $3 billion in reduced spending.  But true to form, it includes no new revenues, and is partly funded by a two-year extension of fees that would have sunsetted (passenger airport security fees collected by the TSA).

This is the 34th short-term extension in the last six-years—and many in Congress are urging that they work on a comprehensive long-term bill. In past decades, Congress routinely passed six-year surface transportation bills.  To that end,  other bills have been proposed:

Currently, the US Department of Agriculture has no authority over labeling food for the presence or absence of GMOs (Genetically Modified Organisms). This week, House will be voting on a bill mandates a national standard for labeling laws related to GMOs and that would nullify any state standards that might exceed the national minimum standard established by this bill:

NOTE: The bill, purported by some to have been written by Monsanto, prohibits States from enforcing any bills addressing GMOs that exceed the requirements of HR1599 effectively nullifying existing legislation in a number of states (Maine, Connecticut and Vermont, where foods containing GMOs are required to be labeled).  If passed, the FDA would be the sole authority to require GMO labeling.

According to the EPA, “coal combustion residuals are byproducts of the combustion of coal at power plants, and includes fly ash, bottom ash, boiler slag, and flue gas desulfurization (FGD) materials. CCR contain contaminants such as mercury, cadmium, and arsenic which are associated with cancer and other serious health effects. When improperly managed, CCR can leak into the groundwater, blow into the air as dust, and be released to surface water and to the land in the event of a catastrophic failure.”

The House has scheduled a vote on HR1734, a bill that would set rules governing the management and disposal of coal ash.

Really?  (1) Not all States have the funding/expertise/organization to provide for enforcement, and (2) we all know how well that worked in North Carolina when they had a massive coal as spill.  In addition, some Democrats in Congress believe that the bill would undermine tougher coal ash rules the EPA finalized in December 2014, which “establishes the first ever nationally applicable minimum criteria providing for the safe disposal of coal combustion residuals in landfills and surface impoundments.”

That is a seriously overloaded plate and with only 16 legislative days left in this fiscal year, that doesn’t appear to be near enough time for this unproductive Congress to resolve those issues.