“The debate is over. The vast majority of the scientific community has spoken. Climate change is real,” said Sanders. “We will act boldly to move our energy system away from fossil fuels, toward energy efficiency and sustainable energy sources like wind, solar, and geothermal because we have a moral responsibility to leave our kids a planet that is healthy and habitable.”

To do all that, Sanders’ plan would outright ban offshore drilling, ban Arctic drilling, block natural gas exports, stop attempts to lift a decades-old ban on crude oil exports, support states trying to ban natural gas fracking, and ban mountaintop removal coal mining. That’s a whole lot of current private sector jobs he’d be killing to bring his plan to fruition.  But it does appear that he intends to create 10 million public-sector(?) clean energy jobs that would replace them.  Many however, may not possess the requisite skills to fill those clean energy jobs, so I hope he’s planning to provide re-skilling education programs as part of his overall plan he’s going to impact the overall economy with a gigantic thud.

The major points of his plans are as follows:

That definitely sets him apart from Hillary Clinton and assuredly proposes to take on BIG oil, but at what cost?

His staff did go all out to detail how his plan would work, complete with an interactive US map that pops out a target clean energy breakdown for each state. Here’s an animation of the pop-out for Nevada, as an example:

The 2050 Energy Costs slide claiming folks will save on average $98/person is a bit odd. Really?  Folks are going to have to buy solar, trash their current car and buy a new car (or give up your car altogether to use a bicycle or walk), all to achieve $98/person … in 2050(?).  Maybe I’m missing something here, but that’s a seriously steep selling curve even to the most avid climate change fanatics amongst us. And the “Money in your Pocket” for “Annual energy, health and climate cost savings/person” (again in 2050) section also makes no sense to me whatsoever.  I don’t come close to spending that much per year on energy, health or climate now and I’m reaching those elder years where one expects to start having to pay a bunch on health care issues.

Take some time and see if you can make some sense of where he wants to take our nation, how drastically quick he wants to get there and whether you think his approach is even do-able given our currently ideologically split nation.  If Bernie’s our party’s nominee, we’re all signing on “revolutionary” ideas to remake our nation.

The last time rules for coal mining on tax-payer public lands were updated, smoking was allowed on airplanes, airbags weren’t required in cars, and sewage was still dumped into the ocean. But today, the Obama administration announced a package of reforms to modernize and reform the federal coal leasing program. Interior Secretary Sally Jewell announced the plan, saying it was long past time to re-examine the coal-leasing program. “It is abundantly clear that times are different in the energy sector now than they were 30 years ago, and we must undertake a review and that’s what we need to do as responsible stewards of the nation’s assets,” she said.

The plan includes three measures to update the federal coal program to account for taxpayer interests and environmental challenges: The U.S. Department of the Interior will conduct a review to identify potential reforms to the program, direct the U.S. Geological Survey to begin annual tracking and reporting on greenhouse gas emissions that come from fossil fuel extraction on public lands, and put a temporary pause on new coal leasing, which will not apply to existing leases.

Coal companies currently have stockpiled billions of tons of unmined coal that is ready to be developed, so a targeted pause on leasing will likely have no impact on jobs, coal production, energy prices, or grid reliability. But it will keep at least 3.5 billion tons of coal from being added to the already-enormous stockpile coal companies have on public lands and allow time to figure out how to best change the current program to ensure taxpayers get their fair share from coal mined on public lands.

The current federal coal-leasing program is fundamentally noncompetitive. Under the current system, taxpayers are missing out on millions of dollars in royalties from leasing energy sources on public lands. Offshore oil and gas drilling is subject to an 18.5 percent royalty charge, but coal companies only pay a 12.5 percent royalty rate for mining on federal lands. Furthermore, royalty rate reductions, loopholes, subsidies, and self-dealing transactions further reduce the effective royalty rate coal companies pay to less than 5 percent. Because the current system fails to ensure mining companies pay royalties on the true market price of the coal they extract, coal companies are able to take advantage of billions of dollars of de facto subsidies.

A flawed royalty system is not the only way the true cost of coal is being undervalued. The environmental impacts of coal, including its contribution to climate change, also impose a cost to the American public. More than 57 percent of all emissions from fossil fuel production on federal lands comes from the combustion of coal. Coal mining in the Powder River Basin alone, which spans across Wyoming and Montana, is responsible for 10 percent of all greenhouse gas emissions in the U.S.

Strip mining and failed mine reclamation produce air and water pollution, which add to coal’s environmental costs. Furthermore, some companies are trying to get out of their responsibility to clean up their mines on public lands, which could leave taxpayers holding the bag for billions of dollars in reclamation costs.

BOTTOM LINE: Not much has stayed the same since the 1980s and the energy sector is no exception. Reform of the federal coal program is long overdue. The Obama Administration’s steps to modernize and reform the program will help reduce the environmental and climate impacts, ensure that taxpayers are getting a fair return, increase transparency and accountability, and hold companies responsible for cleaning up their mining operations.

The whole business of giving tax breaks to businesses to lure them to a particular place is largely a scam.

By William A. Collins

Sure, I’ll move
My business here;
Whisper tax breaks,
In my ear.

There’s a certain political irony surrounding WWE, that unrivaled producer of violence and misogyny for fun and profit. As a significant employer with 700 workers here in otherwise dowdy Connecticut, the outfit formerly known as Worldwide Wrestling Entertainment has already collected $37 million in state tax credits, with more in the pipeline.

This state largesse has added mightily to the company’s profits, nearly $100 million of which funded two losing U.S. Senate campaigns by its former CEO, Linda McMahon. In her failed 2010 and 2012 bids to become a lawmaker, by the way, she claimed to oppose corporate welfare.

Other tycoons are more honest. Throughout our nation, savvy businesses snooker grants, tax credits, exemptions, forgivable loans, free buildings, subsidized training, and other perks from gullible states and cities. Those governments think that without these gifts employers would move elsewhere. Well, sometimes that’s true, but mostly not. The whole business of giving tax breaks to businesses to lure them to a particular place is largely a scam.

The obvious overriding flaw in this bribery system is that if Town A gains a new business from such giveaways, Towns B, C, and D lose out. It’s a zero-sum game. Overall, the company profits while society pays. Recently the Bridgewater hedge fund wheedled a deal from Connecticut’s government to pay it some $100 million to build its new corporate headquarters in Stamford, three towns down the coast from where it is now. Where else was it going to go, Bangladesh? 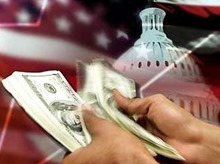 No, Bridgewater needs to be near Wall Street. So, OK, maybe it could move to New Jersey or New York. What we plainly need is not this ongoing bribery competition, but an interstate compact or a federal law making it illegal to subsidize employers to settle in a particular town or state. Let them settle wherever they otherwise think is best, using their own money.

Worse still, some of the biggest bribes nationally go to large corporations to relocate from the North to the South so they can replace their unionized workforce with non-union workers. Not only do these factories collect subsidies to move, but they’re also getting taxpayer dollars to make it easier for them to chisel away at their workers’ security.

The cure for this abuse is federal legislation giving workers equal rights to organize anywhere in the country. It would also help if Uncle Sam could prohibit the use of public money to corrupt the process of selecting a site to locate a factory or corporate headquarters.

There’s probably no way to end our basic inter-town and interstate competition for jobs and tax revenue, but it could be made a lot more beneficial. The idea would be to steer this battle for tax base into healthier channels.

Suppose, for example, that cities competed on the basis of the quality of their schools, or the efficiency of their transit, or the beauty of their parks, or the diversity of their housing? Such public services improve the well-being of citizens and employers alike.

As it is, unfortunately, today’s competition is notably less elegant than that. One “family fun center” in Norwalk, my hometown, just received a grant to upgrade its laser tag equipment. Upstate, an entrepreneur recently collected $100,000 in state funding to create new paintball battlefields. Instead of being tarred and feathered, maybe the officials who granted these giveaways should be lasered and paint-balled.

OtherWords columnist William A. Collins is a former state representative and a former mayor of Norwalk, Connecticut.  Distributed by OtherWords.org

If you missed Rachel Maddow last week, she did an admirable job of taking down Senator Hatch after he attempted to defend the position that the Big Oil companies really, really, really needed those subsidies and that without them, well those Big Oil Companies just won’t be able to create jobs.  Huh?  And what jobs would those be, Senator?  The major oil companies have been raking in profits and shedding jobs for the last decade.  Watch Rachel’s takedown: