Sen. Murray and Rep. Scott Introduce The Raise The Wage Act To Raise The Minimum Wage To $12

Today, Senator Patty Murray and Congressman Bobby Scottreleased the Raise the Wage Act, which would raise the minimum wage to $12 an hour by 2020, get rid of the sub-minimum wage for tipped workers, and tie future increases to the median wage. This legislation would not only be a huge step forward for low-wage workers, but also for the recognition that growing our economy requires investing the workers that make it run, from the middle out, not the top down.

For decades, the value of the federal minimum wage has continued to fall, forcing low-wage workers to fall further and further behind. Raising the minimum wage is a key step in building an economy that works for everyone and investing in the everyday working Americans who strengthen our economy. Here are just a few of the many necessary things the Raise the Wage Act does:

America’s current minimum wage is a poverty wage: Many full-time workers who receive minimum-wage salaries live at or near the federal poverty level. This means that many must turn to public assistance such as food assistance and Medicaid in order to make ends meet. In a recent study, the Center for American Progress analyzed the impact of past minimum-wage changes on spending in one particular program—the Supplemental Nutrition Assistance Program, or SNAP, formerly known as food stamps. The study found that minimum-wage increases lead to statistically significant reductions in SNAP enrollment and spending. When workers’ incomes are increased, some end up relying less on SNAP benefits while others see their earnings boosted above the threshold for SNAP eligibility. The result is a win-win situation for both low-wage workers and taxpayers. 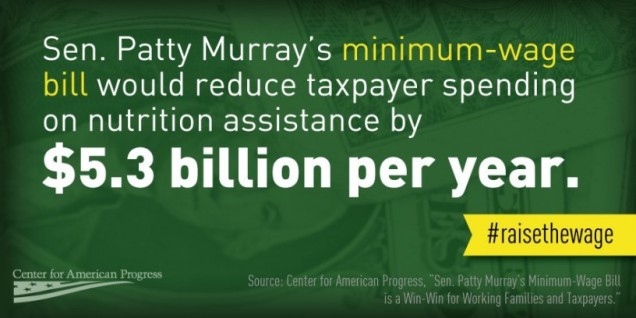 BOTTOM LINE: Americans who work hard and play by the rules should never have to live in poverty. Investing in workers honors the hard work of millions of Americans and puts money back in the pocket of families. What’s good for workers and families is good for the economy.