If the Postal Service were run like Congress, postal workers would only show up on Tuesdays, Wednesdays, and Thursdays — except when they were on vacation, which would be a lot.

The Postal Service says it’s going to stop delivering mail on Saturdays. This won’t happen until August, but the overseers of our postal workers in Congress are already swooning.

“Outrageous” is the cry rolling through the halls of the Capitol.

Can’t help it, responds Postmaster General Patrick R. Donahoe. Our postal service is hemorrhaging money, he says, and we have to cut back. Cutting Saturday delivery would save $2.7 billion a year.

I don’t know about you, but my mail consists mainly of bills, circulars, and requests for money. I can get by with five days of that instead of six.

Apparently Congress can’t. Many of our lawmakers are fuming. Senate Majority Leader Harry Reid called it “short-sighted” and a “crippling blow.”

Whoa! Am I hearing right?

Listen, if the Postal Service were run like Congress, postal workers would only show up on Tuesdays, Wednesdays, and Thursdays — except when they were on vacation, which would be a lot.

Postal workers would repeatedly go overseas on fact-finding missions and come back empty-handed. Empty-headed too, for that matter. 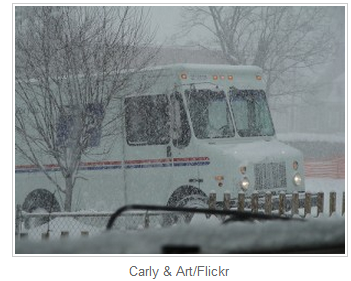 They’d have to change their motto from, “Neither snow nor rain nor heat nor gloom of night stays these couriers from the swift completion of their appointed rounds,” to, “Will deliver mail for campaign contributions.”

The postal system today is under siege from the Internet. The volume of mail handled by the postal service dropped 22 percent between 2007 and 2011. People complain about the Postal Service all the time. But that’s largely because people these days complain about almost everything all the time.

My own experience with the Post Office has been excellent. The clerks at the office I frequent are polite and helpful. The mail I send gets where it’s going in a reasonable time. And my postman knows my name.

The Postal Service is a strange, hybrid creature. It’s not quite private, but not completely public either. It doesn’t get any money from Congress, but Congress gets to decide how it runs its business.

It’s saddled by our lawmakers, for example, with the obligation of setting aside $5.5 billion every year for future retirees, an obligation that no other entity, public or private, endures.

Meanwhile, we have the cheapest first class rates in the English-speaking world.

A first class stamp in Canada costs 63 cents. In the United Kingdom, it’s the equivalent of 94 cents. Here, it’s 46 cents. And we complain about that, naturally.

The Postal Service is running about a $16 billion-a-year deficit these days. It has some ideas to close the gap, beyond getting rid of the pre-funding of retirement benefits and dropping Saturday delivery. It would like to reduce door-to door service in favor of centralized neighborhood mailboxes, and run its own health care system. But it can’t do all of that without Congress’s cooperation, which seems to have gone on permanent vacation.

Sometimes I think we’d be better off if we let Congress run the mail system and let postal workers run the country.

At least they’d show up for work.

Congress, not the post office itself, is the problem

As every 6 year old learns, there is real and there is make believe. The massive Post Office deficit that is driving its management to commit institutional suicide by ending 6-day mail delivery, closing half of the nations’ 30,000 or so post offices and half it’s 500 mail processing centers, and laying off over 200,000 workers, is make believe.

Local post offices all across the country, which function as community commons, including this one in Gerry, New York, are threatened with destruction because of Congress’s shenanigans with the USPS budget.

Here’s why. In 1969 the federal government changed the way it did accounting. It began to use what was and is called a unified budget that includes trust funds like social security previously considered off budget because they were self-sustaining through dedicated revenue.

At that time the Post Office was, as it had been since 1792, a department of the federal government like the Department of Energy or the Department of Agriculture. While generating most of its revenue from postage it also received significant Congressional appropriations.

In 1970 Congress transformed the Post Office into the U.S. Postal Service (USPS). The new quasi-public agency was intended to put the Postal Office on a more business like footing. The Postal Service was given was allowed to borrow to make needed capital investments and was given more flexibility in how it spent its money. In return Congress required the Postal Service to become self-sufficient. The subsidy, at that time running about 15 percent of total revenues (close to $10 billion a year in 2012) was phased out over the next 15 years. After the mid 1980s the only taxpayer funds involved in the Post Office, amounting today to $100 million a year, subsidizes mail for the blind and official mail to overseas voters.

In keeping with the new philosophy that the Postal Service should be independent, President Richard Nixon’s Office of Management and Budget administratively moved its finances off budget in 1974. In 1989 Congress did it by statute.

None of this made any difference, as exhaustively detailed by the USPS Inspector General in a 2009 report. The OMB and the Congressional Budget Office (CBO) continued to treat the postal service as part of the unified budget, the budget they use for “scoring” legislation to estimate its impact on the deficit.

And that’s where the make believe comes from.

In 2001 the Government Accountability Office (GAO) put the Postal Service on its list of “high-risk” programs because of rising financial pressures resulting from exploding demand from both the residential and commercial sectors. A year later the Office of Personnel Management (OPM) found the Postal Service had been significantly overpaying into its retirement fund. It seemed a simple matter to reduce future payments and tap into the existing surplus to pay for current expenses.

And that’s when make believe began to have a tragic impact in the real world.

How the Unnecessary Tragedy Unfolded

In late 2002, the CBO announced that this logical change in the retirement contribution formula could increase budget deficits in Congress’s unified budget by as much as about $3.5 billion a year, or $41 billion over the long haul. If the overpayments were used to delay future rate increases, the CBO added, future government receipts would decline, adding to the unified budget deficit.

To overcome the budget scoring objections Congress began what in retrospect we can see was little more than an exercise in rearranging the chairs on the Titanic. The final law allowed the Postal Service to use its overpayments to pay off its debt and delay increasing rates for 3 years. After that any overpayments were to be collected in an escrow fund that would be unavailable to the Post Office until Congress determined how the funds would be used. And then came the quid pro quo. The Postal Service became responsible for paying postal workers for the time they spent in prior military service. Up until then, as one might expect, these obligations were paid by the U.S. Treasury. Assuming that obligation essentially eliminated any Post Office surplus during the 10 year scoring window.

The House and Senate held 11 hearings on postal reform between 2003 and 2006. Senator Susan Collins, Chair of the Senate Governmental Affairs Committee commented, “two issues… united every single witness who has testified before our committee … a desire to see the escrow account repealed and the return of the military pension obligation to the Treasury Department.”

Bills to this effect were well received in Congress. But again and again the OMB and CBO stepped in to thwart policy makers. In 2004, as the bills were moving rapidly through Congress the Bush Administration stopped their progress by announcing its opposition,which they justified by the impact on the unified budget. The next year, on the day that a bill to help the Post Office with big bipartisan backing was brought to the floor of the House , the Bush Administration again threatened a veto because of its “adverse impact on the Federal budget”. Congress backed down.

In 2006 Congress finally passed a new law. The Postal Service was allowed to tap into escrow money and pension obligations for military service were shifted back to the US Treasury. But again a quid pro quo was required that negated any financial benefits that would result. To achieve unified budget neutrality the USPS was required to make 10 annual payments of between $5.4 billion and $5.8 billion each to the newly created Postal Service Retiree Health Benefits Fund. The fund could not be tapped to pay actual retiree health benefits during those 10 years.

The level of the annual payments was not based on any actuarial determination. The numbers were produced by CBO as the amounts necessary to offset the loss of the escrow payments.

Remember, this all began because the post office discovered it had surplus funds. Unified budget accounting made sure it could never tap into this surplus unless at the same time it assumed new liabilities of an equal magnitude.

The solution to the post office financial deficit is simple. Give it back the money Congress, as a result of pressure from the CBO, has stolen from it over the past years. Then make future payments into the health fund for retirees actuarially based.

Once this artificially generated financial noose is removed from the postal service’s neck we can get on with helping it navigate the shoals of an uncertain future. To do this the postal service must build on its two most important assets: its ubiquitous physical infrastructure and the high esteem in which most Americans hold it. In combination, these assets offer the post office an enviable platform upon which to many new revenue-producing services.

In offering new services the USPS could learn from post offices in other countries. The French post office offers banking and insurance services. Remember that from 1911 to 1967 the US Post Office successfully and profitably ran a nationwide postal savings bank. The Swedish post office will physically deliver e-mail correspondence to people who are not online.

But before any of this will happen we need to fess up. The postal crisis is contrived. Let’s stop scaring ourselves silly with make believe deficit monsters and unshackle this national asset.

This work is licensed under a Creative Commons License

David Morris is Vice President and director of the New Rules Project at the Institute for Local Self-Reliance, which is based in Minneapolis and Washington, D.C. focusing on local economic and social development.