A former Obama aide is calling on Democrats not to support President-elect Donald Trump‘s so-called infrastructure plan, saying it’s a “trap” and a “mistake in policy and political judgment they will regret.”

On the campaign trail, Trump promised to invest $1 trillion into repairing America’s crumbling roads and bridges, creating new jobs along the way—an investment which the nation clearly needs. Over the weekend, influential Democrats like Sen. Charles Schumer of New York pointed to it as a bipartisan issue that could help unite a bitterly divided country.

But a closer look at his proposal shows the plan may just be a smokescreen for corporate tax cuts that might not build anything new at all.

Ronald A. Klain, who served as an assistant to President Barack Obama and led the team implementing the American Recovery and Renewal Act, wrote in the Washington Post last week, “I’ve got a simple message for Democrats who are embracing President-elect Donald Trump’s infrastructure plan: Don’t do it. It’s a trap.”

Klain, who also served as an adviser to Hillary Clinton’s 2016 campaign, explained:

First, Trump’s plan is not really an infrastructure plan. It’s a tax-cut plan for utility-industry and construction-sector investors, and a massive corporate welfare plan for contractors. The Trump plan doesn’t directly fund new roads, bridges, water systems or airports, as did Hillary Clinton’s 2016 infrastructure proposal. Instead, Trump’s plan provides tax breaks to private-sector investors who back profitable construction projects. These projects (such as electrical grid modernization or energy pipeline expansion) might already be planned or even underway. There’s no requirement that the tax breaks be used for incremental or otherwise expanded construction efforts; they could all go just to fatten the pockets of investors in previously planned projects.

Meanwhile, public infrastructure projects that don’t appeal as much to private contractors—such as repairs to city water systems, existing roads, and non-toll bridges—”get no help from Trump’s plan,” he added.

And Trump’s planned tax break windfall for businesses, combined with a “10 percent pretax profit margin” included in the infrastructure plan, would add up to an $85 billion profit for contractors, after taxes, and “underwritten by the taxpayers,” he continued.

Because the plan prioritizes investors and tax breaks, rather than subsidizing projects and repairing public infrastructure, “there is simply no guarantee that the plan will produce any net new hiring,” Klain wrote. “Investors may simply shift capital from unsubsidized projects to subsidized ones and pocket the tax breaks on projects they would have funded anyway.”

Those warnings were echoed by Nobel Prize-winning economist Paul Krugman, who writes in the New York Times on Monday, “Progressives should not associate themselves with this exercise in crony capitalism.”

If you want to build infrastructure, build infrastructure. It’s hard to see any reason for a roundabout, indirect method that would offer a few people extremely sweet deals, and would therefore provide both the means and the motive for large-scale corruption. Or maybe I should say, it’s hard to see any reason for this scheme unless the inevitable corruption is a feature, not a bug.

Now, the Trump people could make all my suspicions look foolish by scrapping the private-investor, tax credits aspect of their proposal and offering a straightforward program of public investment. And if they were to do that, progressives should indeed work with them on that issue.

But it’s not going to happen. Cronyism and self-dealing are going to be the central theme of this administration—in fact, Mr. Trump is already meeting with foreigners to promote his business interests. And people who value their own reputations should take care to avoid any kind of association with the scams ahead.

In his op-ed for the Post, Klain compared the plan to former President Ronald Reagan’s disastrous tax cuts in the 1980s, which, he noted, led to massive deficits that were used to justify slashing funding to social programs.

“Thus,” Klain wrote, “Democrats should know that every dollar spent on the Trump tax scheme to enrich construction investors and contractors is a dollar that will later be cut from schools, hospitals, and seniors.”

This work is licensed under a Creative Commons Attribution-Share Alike 3.0 License

“If you are a salesman and you see life and politics as about the sell, you adjust the sell every time to a different customer-base.” — Andrew Sullivan

Who was that last night at the debate with President Obama?  It kind of looked like it might have been former Massachusetts Gov. Mitt Romney. But, the words that came forth from that guy’s mouth didn’t sound anything like what he’s been saying over the last 18 months.  Was the debate stage yet another etch-a-sketch moment for Mr. Romney?  And if it was, what might we expect should he win the opportunity to walk through the doors of the White House to take up residence there?

Governor Romney has been saying, that is, up until last night that is, that he is on the same page as Congressman Ryan.  If that really is his stance, and I suspect that it is, America’s seniors and the middle class should take note of what that means for them.  And if you listened to Andrea Mitchell this morning. as she interviewed former Gov. Sununu, absolutely everything will be on the table for identifying spending cuts with which to balance out Romney’s tax cuts, medicare, medicaid, social security, home mortgage interest deductions, charitable deductions … everything!

Up until last night’s debate, Romney’s budget plan has been strikingly similar to Paul Ryan’s “Path to Poverty” budget which espouses some serious tax cuts for the top and what will most likely be deep cuts for the middle class.  But apparently, since Mr. Romney new he would have his largest audience to-date and figuring that “that” audience would have a large number of people who, up until now, hadn’t chosen to tune in to his rantings, that it was time to employ a “gish gallop” debate strategy … or, if you spent any time in the service, it’s a common technique known as just “baffling them with bullshit.”

The Urban Dictionary defines the Gish Gallop as follows:

Named for the debate tactic created by creationist shill Duane Gish, a Gish Gallop involves spewing so much bullshit in such a short span on that your opponent can’t address let alone counter all of it. To make matters worse a Gish Gallop will often have one or more ‘talking points’ that has a tiny core of truth to it, making the person rebutting it spend even more time debunking it in order to explain that, yes, it’s not totally false but the Galloper is distorting/misusing/misstating the actual situation. A true Gish Gallop generally has two traits.

Again, up until last night, Mitt Romney touted both in speeches and on his campaign website, permanently extending the 2001-03 tax cuts, further cutting individual income tax rates, broadening the tax base by reducing tax preferences, eliminating taxation of investment income of most individual taxpayers, reducing the corporate income tax, eliminating the estate tax, and repealing the alternative minimum tax (AMT) and the taxes enacted in 2010’s health reform legislation. 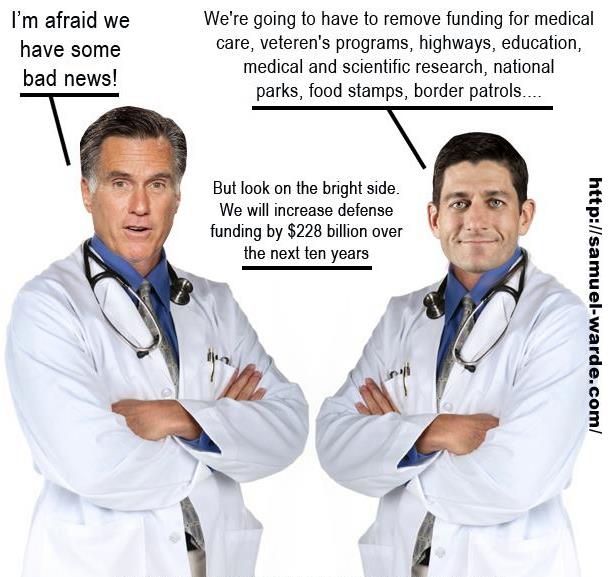 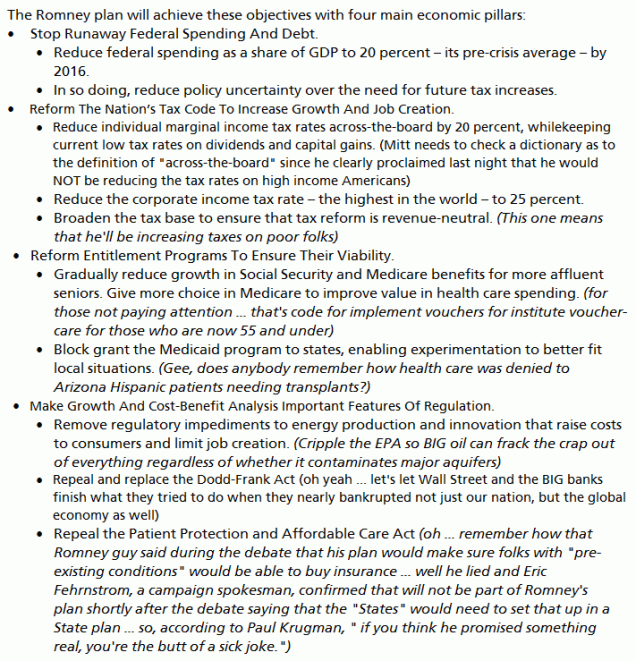 Romney pushed his plan throughout the primary season and once he was officially named the GOP nominee, he announced his running mate … Paul Ryan, someon we’re all familiar with given his stance on economic issues. Romney has expounded on how much he likes how Ryan thinks, fiscally that is. Their budgets/plans are surprisingly similar. Both the Romney “plan” and Ryan budget would:

They plan to all of do that, while at the same time, giving massive tax cuts to the wealthiest and protecting taxpayer subsidies to oil companies and hedge fund managers. But they’re not stopping there. They also plan on repealing health care reform and cutting over $1 trillion from Medicaid. By doing so, Governor Romney and Congressman Ryan would deny coverage to approximately 50 million Americans who currently have it, including low-income children, pregnant women, nursing home patients and people with disabilities.

Up until last night, this is what Romney supposedly espoused as compared to what we know that Rep. Paul Ryan promotes (because Ryan’s “Path to Poverty” is actually in writing and has been introduced in Congress): 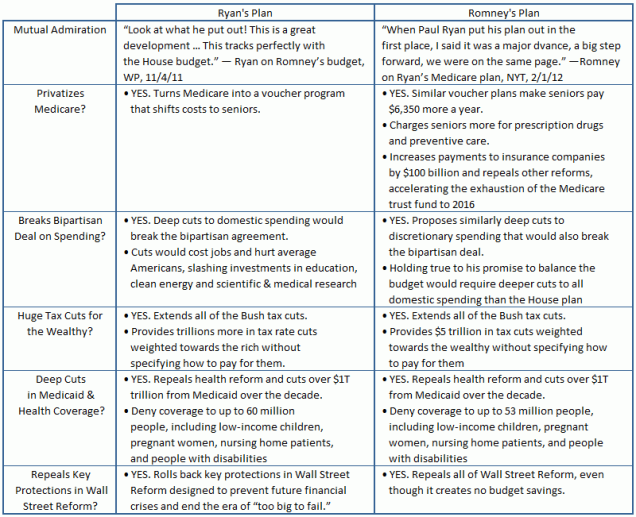 I’m now sure who the decoy Romney was who showed up last night to debate President Obama. The policy ideas “decoy” Romney perpetrated on unknowing first time viewers bore no resemblance to what the “real” Romney has been stumping about on the campaign trail for 18 months. Call it yet another Etch-A-Sketch moment, call it a Gish Gallop strategy, call it masterful performance art, or just call it what it was … LIES. It’s all about the same.